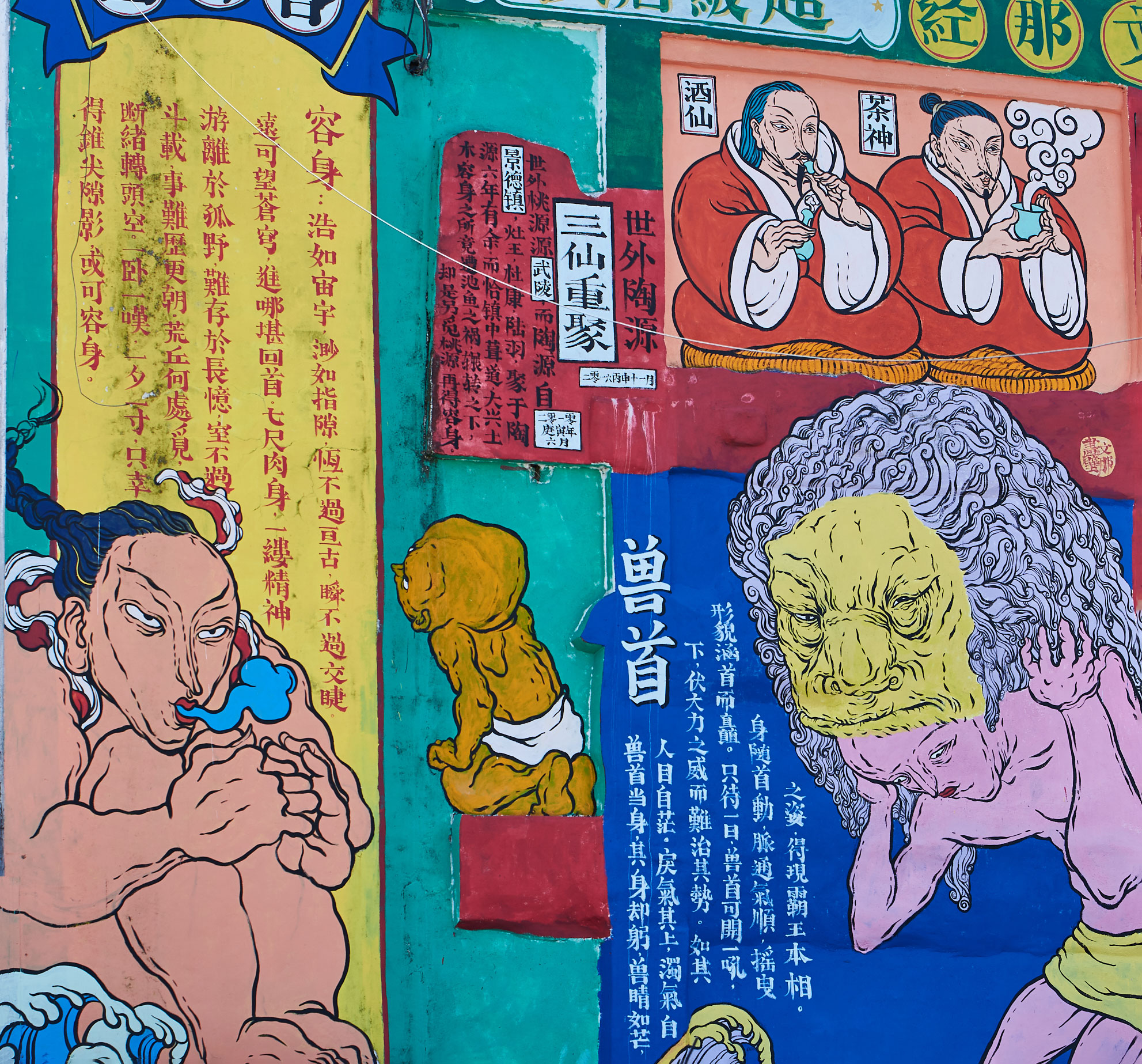 From the colourful streets of Port Louis to the vibrant artistic community in Mangalkhan suburbs, there’s creativity wherever you go in Mauritius. And that creativity spills out into the island’s streets. Once dull, grey and dark, our walls are now alive with colour! So join us on foot, as we explore Mauritius’ exciting art scene.

Head down to Chinatown

First things first, let’s go to Chinatown. Once ravaged by fires, the commercial heart of our capital remains a soulful and unique spot with a remarkable 100 murals. This corner of Port Louis, stretching from Dr Joseph Rivière Street to Peace Street, has retained an exceptional atmosphere and is becoming trendy once again.

The murals have found a home here thanks to the New Chinatown Foundation and the Chinese Festival, which have been working since 2005 to revitalise the district through artistic and civic initiatives. Make sure you fully charge your camera battery; you’ll want to take plenty of pictures once you’re here!

To get to this artistic hub from the Port Louis bazaar, take the Royal Street and head north to the large concrete archway that symbolises the entrance to Chinatown. Keep your eyes open, taking in the colours of the walls as you walk past. At the intersection with Rue Emmanuel Anquetil, you will come across folkloric restaurants and old, brightly-coloured ’boutik’. Continue and turn right onto Sun Yat Sen Street. Look closely and you’ll see a giant dragon on the left and Bruce Lee on the right – you are in the most colourful street of the island!

The walls are mainly filled with the work of amateur artists from the neighbourhood, like Yan Jian and Seven Chi. They’re beautiful, sometimes funny, often poetic, and your walk will be full of surprises. Take your time, turn back to Rue Emmanuel Anquetil and Joseph Rivière, and you will discover the works of more established artists such as Armand Gachet and his flute player, or Rymd and his impressive 14-metre wall painted for the Porlwi festival.

In 2015, the Porlwi festival turned the capital upside down. The 400,000 people present at the first festival marvelled at a new Port Louis and it’s thanks to this festival, that the capital’s new totems are no longer made of stone but of paint.

Go to Rue Bourbon, the heart of the first festival, which was transformed into a pedestrian and green street for the third time the event ran. Here, the walls are painted by the great names of street art. On Rue Rémy Ollier, a stone’s throw from the Port Louis theatre, you’ll find a magnificent black and white wall by Mauritian Brian Lamoureux (as seen in the video below) alongside the graffiti of Resko and the immense work of the Berlin duo, 44flavours.

Next, look up: the bulbul (the Mauritian bird with a punk’s crest) by Méo from Reunion reigns over the neighbourhood. At 30 metres high, it surpasses the German Quintessenz’s ‘Room 712’, which held the previous festival record. Excessiveness in Port Louis is something to be celebrated! Further up Rue Bourbon, enter an open-air car park on your left. Here, you can marvel at the silhouette of a child whose spirit escapes through a window, created by the French artist Seth, and have fun looking at the whimsical characters of French street artist Bault. Further down towards the harbour, you will see a crouching woman, the work of the Canadian Andrea Wan. And there are so many others, sometimes hidden, such as Mauritian graphic artist Jody Jean Pierre’s delicate birds, found in the shade of old Creole buildings. Art has truly taken possession of Bourbon Street. It’s colourful, it’s lively, it’s cosmopolitan – it’s the Port Louis we love! 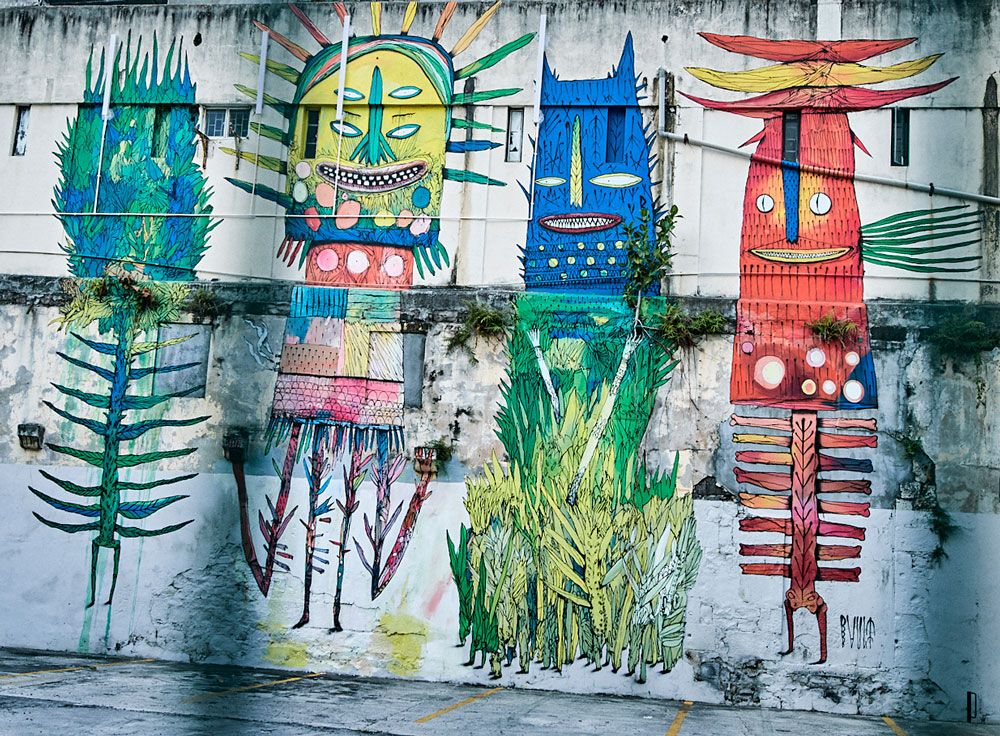 Say goodbye to Port Louis and head towards the central plateau and the Willems Plains. This is the heart of the island’s urban population. Here, in a corner of Floréal, it’s the Mangalkhan suburb that catches our eye. Its name, Mangalkhan, was inherited from a slave and this underprivileged neighbourhood looks similar to a South American favela, with small painted and flowery houses. It’s a neighbourhood where great names in Mauritian culture and sport have grown up, such as the Joseph brothers, Ryan Pynam and Stephan Buckland, as well as having a musical connection with Vent d’un Rêve.

Since 2017, Mangalkhan has taken on a new lease of life. Through the citizen initiative ‘Colour for Change’, led by the painting company Sofap, entire buildings and walls have been painted collectively by members of the neighbourhood, the collective K3K (Kolektif 3 Kartie) and the famous Mauritian artists Evan Sohun and Gaël Froget.

Forget any prejudices you might have of the suburb and wander through the narrow streets of Mangalkhan. Your starting point should be the famous Mangalkhan lodges. These buildings, best to be avoided in the evening, were the boxes of a racecourse built by the Mauritius Jockey Club in 1906, today transformed into a sports and association space. Although the historical character of the place has disappeared, the murals and bright colours that cover its walls give it new life.

Our walk ends on the northern part of the island, halfway between Port Louis and Grand Bay, in the green lung of the historical region of Pamplemousses. You probably know Beau Plan – there’s sugar cane for as far as the eye can see and it’s where you’ll find the Aventure du Sucre. Around the famous museum, a whole town is being developed, mixing century-old trees, commercial spaces and vestiges of the industrial era in a modern and creative living environment. At the head of the gondola is Mahogany, a shopping centre unlike any other – it opens in an arc over a lake and lights up with a thousand (solar) lights at night.

When you arrive by car, you will come across a huge decorative work painted by Baba Gaïa. The young Mauritian artist is part of the new wave of iconic Mauritian talent that has graced the walls of Beau Plan – joining the likes of Daphne Doomun and Dévid, whose work you can see in the streets of Port Louis and in the garden of the Aventure du Sucre. The highlight of your stroll in Beau Plan is the Creative Park. Adjacent to the museum on the waterfall side, it is a well-known space for the island’s cultural and artistic industries. From Brian Lamoureux’s yellow house to the characters of The Little Big People, there are so many colours to behold! During the Dreamers event, organised by La Isla Social Club, three walls were painted for one evening: Baba Gaïa and Tania covered the façade of the Sudio Dance School, the North Side Zoo collective painted a corner of the park, while Nitish, aka NCA, left a message written in Creole in giant letters: ‘Lavi enn zoli vwayaz’. Yes – ‘Life is a beautiful journey’!