The spotlight comes on again at the Théâtre de Port-Louis 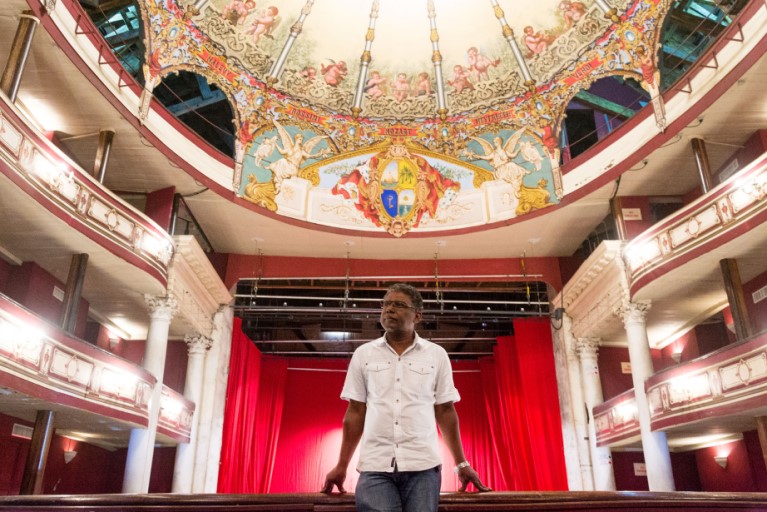 Once the heart of cultural and social life in the capital of Mauritius, Port Louis’ theatre is now closed – but not for much longer. Before its newly-confirmed resurrection, let’s enjoy the history behind this magical place.

It was the meeting place for Port-Louisian. A beautiful address for the capital’s upper crust. And now the very emblem of Mauritian culture is at half-mast. Built in 1822 in Port-Louis’ heart, the oldest Italian theatre in the Southern Hemisphere has long been closed. Its parquet creaks and its walls breathe history, yet the projectors have been turned off since 2008. Abandoned for too long, covered with dust, the theatre remains hopeful. Its renovation, and latest attempt, began in 2018.

Eddy Lamour has a smile. The former theatre-lighting designer, who has become its guardian, walks behind the scenes of this extraordinary place every day. He opens the shutters to ventilate the hall, checks the lights, enters the engine room, walks through these dark boxes. He is the only survivor of the Théâtre de Port-Louis’s heyday, a time when we all met in front of this central place of capital life. A vestige of the past, the theatre is the exception in a city that never looks backwards: “Some buildings have been destroyed even though they represented the original character of Port-Louis,” says Eddy. “We wonder today what history we’re going to bequeath to future generations.”

Do you want to glean a little history? Then plan a walk around the theatre’s neighbourhood! Lush lanes, street vendors… this is the ideal district in which to immerse yourself in Port-Louis’ atmosphere. Opposite the theatre, the poetic Rue du Vieux Conseil is another souvenir of the colonial era, and a must when visiting! Despite the regrettable and recent closure of the Vieux Conseil café, this street hardly lacks attractions. French poet Baudelaire slept on it, while the legendary privateer Robert Surcouf liked to walk along it. You can also visit the historic Museum of Photography and the Malcolm de Chazal Foundation, devoted to a famous Mauritian poet and painter. Breathing amidst the tumult, Rue du Vieux Conseil is, today, Port-Louis’ only pedestrianised street.

With a little luck, during your walk, you will come across Eddy Lamour outside the theatre (whose facade is now like new). This guardian angel loves to share his memories and take people behind the scenes. So much poetry and nostalgia permeate the place that, inside with him, you could imagine yourself in The Phantom of the Opera. In one corner remains the legendary grand piano. Above, a magnificent painted dome is also still there, as are those parquet floors and stone pillars. The rest, including the old red seats, have disappeared. Such a facelift is brutal, but light is visible at the end of the tunnel.

“The renovation is well underway,” says Eddy. “We’ll see, but it could be a breath of fresh air for Port-Louis’ centre. When that happens, I would be very happy to resume my job as a lighting designer!”

The second phase of the renovations should start in 2021 and last at least a year. The Théâtre de Port-Louis will, once again, have a thrilling story to follow… fingers crossed.