Be swept away by Sega in Mauritius 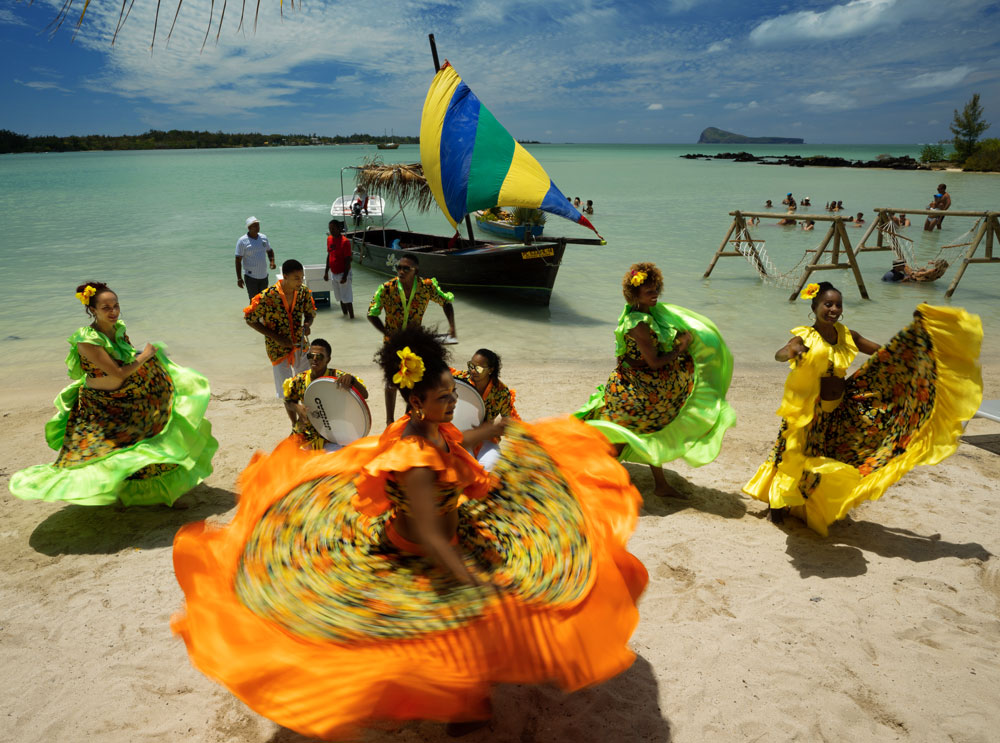 Can you hear, in the distance, the rolling of the ravanne? To really understand Mauritius, immerse yourself in the rhythms of the local music – a symbol of the island’s culture.

This music emerged before the Creole language, which is now shared by all Mauritians. It was a music with a dynamic (some would say frenzied) rhythm that served as the social fabric of the inhabitants (from the four corners of the world) of Mauritius. This music was born at the time of slavery. It is, of course, the Sega – the major musical trend and identity of Mauritius.  A melting pot, the music has deep African roots but with Latin American and Caribbean accents. A festive and joyful music carried by the ravanne, the maravanne, the triangle, the djembe and the roulèr – all instruments that are still used to celebrate the traditional Sega.

The ravanne and its fire

The ravanne, in fact, is a whole story in itself – almost an object of resistance used to express the Mauritian tradition of Sega. This tambourine, made of goat’s skin, requires a special know-how to be made… and to make it sound right. The image – which has become somewhat of a caricature – of Mauritians dancing around a fire on the beach makes sense. The fire was used to regularly heat the ravanne, to relax the skin before playing. The sand allowed the Sega to be danced properly, by sliding the feet on the ground without ever lifting them.

Because the Sega is as much a music as it is a dance. A little manual for beginners: this music is filled with passion…and sensuality. On the sand (or on the dance floor), you must wiggle your hips very quickly while spinning. That’s it for the solo. For the duet, it’s an even more physical story! The woman leads the dance and chooses the direction. The man tries to follow, staying as close as possible. The difficulty arises when, to the rhythm of the sound, one of the dancers gradually bends his knees to get as low as possible. If you manage to keep up with your partner, you have become an ace at Sega!

From Ti Frère to Cassiya

Our work here is done. Tonight, you will (finally) be able to dance the Sega properly! However, your mission has not yet been completed. If the Sega is the flagship emblem of our island’s cultural heritage, you should know some of the names that have marked the history of the island. For the most traditional version of this music, known as the Tipik Sega, make sure you remember Ti Frère, Claudio Veeraragoo, Serge Lebrasse, and Jean-Claude Gaspard.

For a more modern Sega, which includes guitar and brass instruments, you should know the names of Cassiya, Emlyn, Désiré François, Linzy Bacbotte and Alain Ramanisum. And we haven’t even mentioned Seggae, the other main trend in Mauritian culture! Born at the end of the 1980s from the blending of Sega and reggae, Seggae is embodied by an artist whose name resonates in the hearts of all Mauritians: Kaya. But that’s another story, made of sweat and blood, that we will tell you soon… not necessarily by the fire or with your feet in the sand.

Have you read this far? Now you can go further and start soaking up the best of current Mauritian music by listening to the ‘Like a Local’ playlist. This quality selection concocted by Attitude Hotels brings together some of the (emerging) names from Konpoz to Lamizik (our music competition), from Melanie Peres to Black Soul Fever, and some of the most popular artists on the island such as Zulu, The Prophecy and Hans Nayna. This ‘Like a Local’ selection symbolises the evolution of Sega music towards other horizons, towards other musical colours, from pop to rock, from fusion to reggae. In short, it’s the ideal playlist for your next holiday in Mauritius!